Vybz Kartel responds to a female on Instagram who reference his son Likkle Addi to Clive “Lizard” Williams’ death.

Social media is a fair game for everybody, and once a post is made, everyone has the go-ahead to weigh in, including celebrities. Each person is entitled to their unsolicited opinion, and Instagram user @sashiboo1 did just that when she commented on a post made by the Instagram profile representing Dancehall icon Vybz Kartel.

The post highlighted the appearance of Vybz Kartel’s son Likkle Vybz on Winford Williams’ TV show OnStage. IG user sashiboo1 took the opportunity to voice her opinion saying, “I wonder how u would feel if the same faith reach him just like what happened to Clive (lizard) williams, old time people used to say what goes around the University works in mysterious ways!”

A loyal Vybz Kartel supporter offered up a fierce clap back while hinting that the man the dancehall star is accused of killing is in hiding possibly in Cuba.

During the exchange of words, Vybz Kartel landed his response to the IG user who made mention of his son. The comment was delivered and packaged in the form of a gruesome threat in which he questioned, “wonder how u would feel if me send come shot yuh inna face in front u mada.” He continued, “any bwoy even dream dat, everting inna him yaad dead. all di baby weh just born yesterday. Stop mek internet fool yuh gyal.”

Dancehall fans grabbed a screenshot of Vybz Kartel response to the female. While some folks agreed with his strong response, some fans think he went a bit overboard by threatening to female who made the comment. “She is wrong for the comment, but he literally just threatened her and he’s behind bars awaiting an appeal so this is just foolish on his part,” one person wrote. 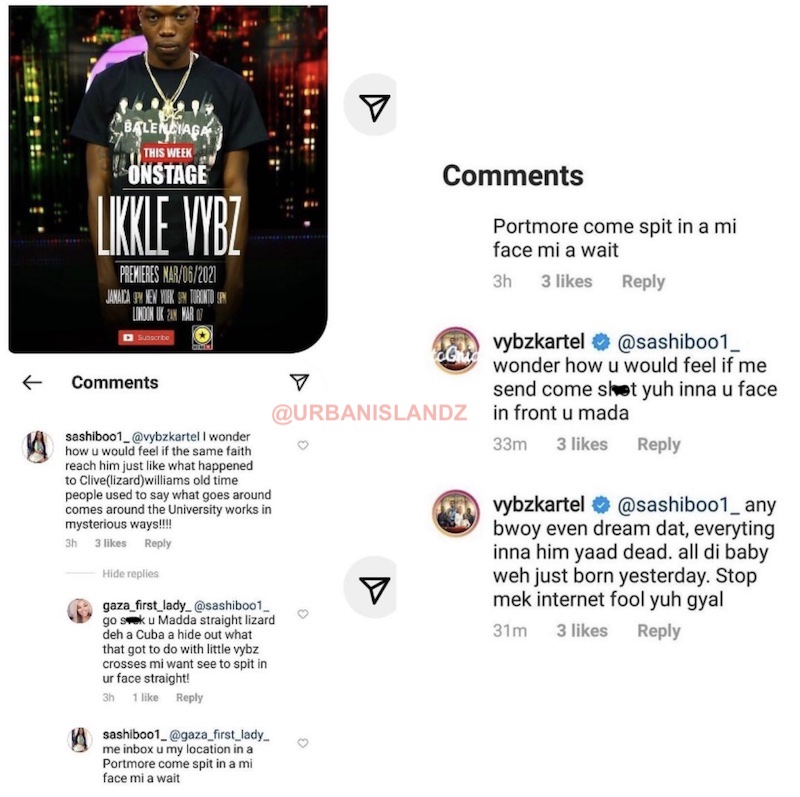 In 2014, Vybz Kartel was sentenced to life imprisonment for the murder of his former associate Clive “Lizard” Williams. Despite being in prison, the former Portmore Empire artist continues to release music and has remained active on social media. He will be eligible for parole once he has served a minimum of 35 years in prison. It is still uncertain if the profile dubbed ‘Vybz Kartel’ is being operated by him, but if not, he has a very active public relations personnel.